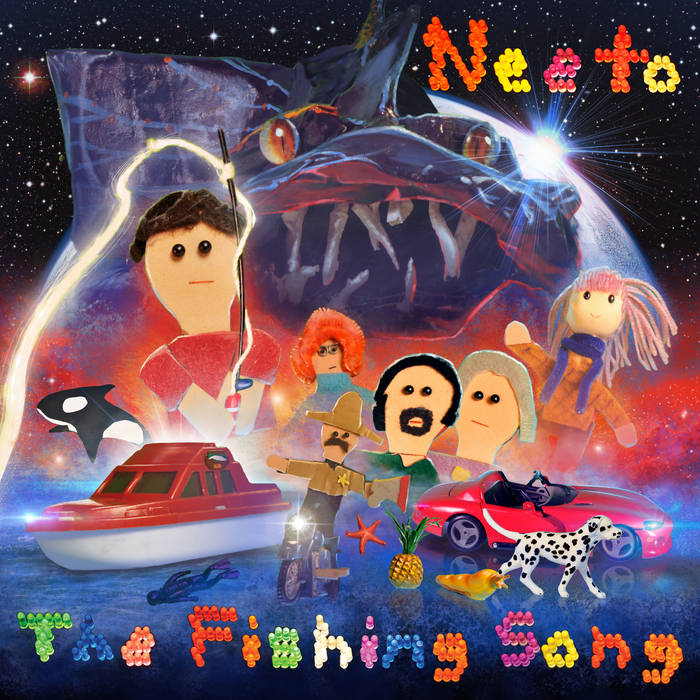 Come gather round friends, Let me tell you a tale
of a young boy's search for the fisherman's holy grail.
My folks they did say “You won't catch a damn thing,"
I said, “We can do it. We’re going fishing!”

So me and my pals, we set for the water,
the sunshine she menaced as temp it grew hotter.
But we’re making good time and the pavement we's crushin.
The tires were a'screachin, toward the old river Russian.

The memory of that evil beast, On my heart and on my bones it'd make a fine feast.
For my life (for my life!)
I did fend (I did fend!)
After a casting my line for the first and only time, I will never go fishing again.

Lights in the rearview, busted we were –
‘I said "Sir we ain't speedin, oh honest we're sure."
"I ain't gonna' arrest ya, so y'all listen good"
so said the sheriff “stay out of this dark and deep wood.”

He spoke, “Turn back ya children, I can't let ya through.
There's trouble a'brewing and between me and you.
It lurks in the waters, a mammoth, a shade.
Its eyes are like wildfire its teeth are as sharp as a fisherman's razor blade."

The memory of that evil creature, Up next after Wolfman it could be a double feature,
I did fear (I did fear!)
For the end (for the end!)
After a casting my line for the first and only time, I will never go fishing again.


Well we don't heed no warnings, for goodness sake!
But not yet did we know of our gravest mistake.
Our future was sealed like an envelope mailed.
By that bonafide monster, as huge as a killer of a whale.

Now we're out on the water, so placid this scene.
Sunshine and quietude or so it would seem.
We had bait, we had tackle:the conditions sublime.
We surely weren't ready for the fright of a lifetime.

But while drinkin' our beverges, a rumble awakened beneath us. (Beneath us)
The sound it was loud it was loud, it was loud as a school bus (A school bus)
A foreboding sort of rapids- I'm telling it you as it happened!
With one fierce glance, I swung the rod back, and then cast my line into the water

Oh what horrid beast, it flew out the water over me
Shocking eyes and terrible teeth - snapped the line and it escaped into the deep!!!

Now children...
The sky went from grey to blue, the rapids lay tranquil.
And me I's dumbfounded, for my life I was thankful.
I returned to the land, such a weight on my chest.
Winded and battered, failed in my quest.

But as for the monster, a legend's been built,
Some say it's out there, some say it's been kill't.
The beast it had vanished, Never from to be heard,
I felt like Ash Ketchum caught sight of a legendary bird.

Special Thanks to Susan Einstein, who has been instrumental in bringing this project to life.

Bandcamp Daily  your guide to the world of Bandcamp